Learn how the country’s first gondolas will operate in Kuélap.

According to the Mincetur this year the number of tourists to Amazonas could exceed 75 thousand visitors.

After more than 15 years of waiting, from tomorrow national and foreign tourists will be able to reach the Fortress of Kuélap in Amazonas, one of the most important archaeological sites in the country in just 20 minutes, using the first system of cable car cabins that has the Peru, which was inaugurated today by the Government.

More Was this review helpful? According to the owner of the Mincetur, Eduardo Ferreyros estimated that tourism in the area will triple, from an average of 40 thousand to 120 thousand tourists who will visit Kuelap a year, generating tourism and economic development in the region and contribute to the consolidation Of the northeastern tourist circuit of Peru.

“We have a high technology infrastructure and that will increase the number of tourists, last year they visited about 56,000 tourists, this year without the cable car running they were estimated at 75,000, but I think this year we will outdo it long.”

Of the total flow of tourists, 25% are foreigners and 75% are national. In that sense, he stressed that in 2016 visited the Fortress of Kuélap a total of 56,010 visitors, an increase of 54% compared to the previous year.

How will it operate?

The total cost of the ticket to transfer to Kuélap through the System of Cable cars will be S/. 20 round trip. In a first stage of the project will operate 26 gondolas with 8 passengers each, estimated to carry up to 1,000 passengers per hour.

This new transport, that will cover 4 kilometers to 670 thousand meters of height towards the enigmatic fortress located in the province of Chachapoyas. 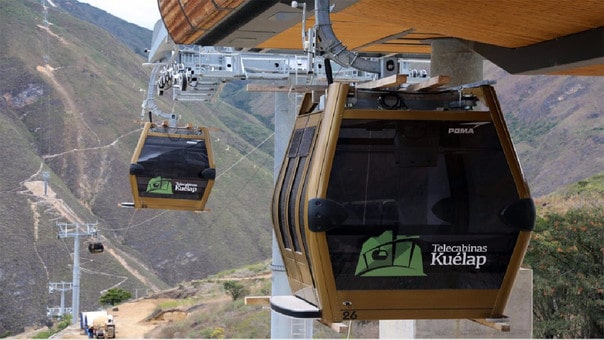 Dare to live a magnificent experience in the tour to Kuelap, make the reservation of your tour package to Amazon, Gocta Falls and Kuelap with the guarantee of quality in ILE Tours Peruvian Travel Corporation, we have hotels of 5, 4, 3 stars and the Best restaurants at your disposal. Dare yourself!!!