Paracas National Reserve is the only coastal marine reserve that includes a portion of the Pacific Ocean within its borders. It features unique flora and fauna species and is a haven to a variety of migratory bird species. The reserve is recognized by Ramsar as a Wetland of International Importance.

The landscape is mostly dominated by sandy desert. There are also some portions covered by desert scrub, made up of xerophytic species that have adapted to the extreme arid conditions. Seventy-four plant species have been identified to date. The varying natural conditions in the area have resulted in a wide diversity of animal species: there are approximately 216 bird species, 19 mammal species, 52 fish species and six species of reptiles in the protected area. The reserve is a haven for large numbers of bird species, both native and migratory. Several species found in the reserve are considered vulnerable, including the kelp gull (Larus dominicanus), black skimmer (Rynchops niger), and the American oystercatcher (Haematopus palliates).

According to the World Conservation Union’s (IUCN) Redlist of Threatened Species, the following species are threatened to some degree: the South American flamingo (Phoenicopterus chilensis) and the condor (Vultur gryphus) are near threatened; the Humboldt penguin (Spheniscus humboldti) is vulnerable; and the Peruvian diving petrel (Pelecanoides garnotii) is endangered. Both the Humboldt penguin and the Peruvian diving petrel are endemic species of the Humboldt Current of the Pacific Ocean and are found in the marine portion of Paracas National Reserve.

The Paracas culture was an important Andean society between approximately 750 BCE and 100 CE, with an extensive knowledge of irrigation and water management. It developed in the Paracas Peninsula, located in what today is the Paracas District of the Pisco Province in the Ica Region. Most of our information about the lives of the Paracas people comes from excavations at the large seaside Paracas necropolis, first investigated by the Peruvian archaeologist Julio Tello in the 1920s. The necropolis of Wari Kayan consisted of multitudes of large subterranean burial chambers, with an average capacity of about forty mummies. It is suggested that each large chamber might have been owned by a specific family or clan, using it for many generations. Each mummy was bound with cord to hold it in place, and then wrapped in many layers of intricate, ornate, and finely woven textiles. These textiles are now known as some of the finest ever produced by Pre-Columbian Andean societies, and are the primary works of art by which Paracas is known.

The Islas Ballestas (Ballestas Islands) are spectacular islands with many caves and arches, which provide shelter for thousands of seabirds and sea-lions. Although the islands fall just outside the Paracas National Reserve they are protected by separate legislation. The islands are home to over 150 species of marine birds including the Humboldt penguin, cormorants, boobies and pelicans. Even condors have been known to visit. On the shores can be seen large numbers of sea-lions and in the sea it is possible to encounter dolphins and even whales.

Guano was widely used by the native populations of pre-Spanish Latin America for centuries as a fertilizer to increase crop yields. However, it was not until the early 1800s that guano was rediscovered by the Europeans to have valuable agricultural benefits as a fertilizer. The best source of guano was discovered on a series of islands off the coast of Peru which are barren and rocky with no vegetation due to lack of rain in the area. Peru’s primary guano islands are the Chinchas, the Ballestas, the Lobos, and the Macabi and Guanape islands. Peru’s guano was considered to be the best for farming.

Guano is made up of bird droppings amassed over hundreds of years due to weather and ocean currents. What distinguished Peru’s guano from guano found at other sources around the world was due to the unique weather conditions found along Peru’s coast. Because of the Humboldt or Peruvian Current, which flows cold water from Antarctica to the equator along Peru’s coast, this creates an interesting weather pattern where the cold water and warm air prevents the fall of rain in this part of the world. Due to the lack of rain on the islands along Peru’s coast, the accumulated bird droppings are baked in the dry atmosphere which preserves the nitrates in those droppings from evaporating, thus maintaining its effectiveness. Another factor that made guano an effective fertilizer was that its contents originated from fish-eating birds. 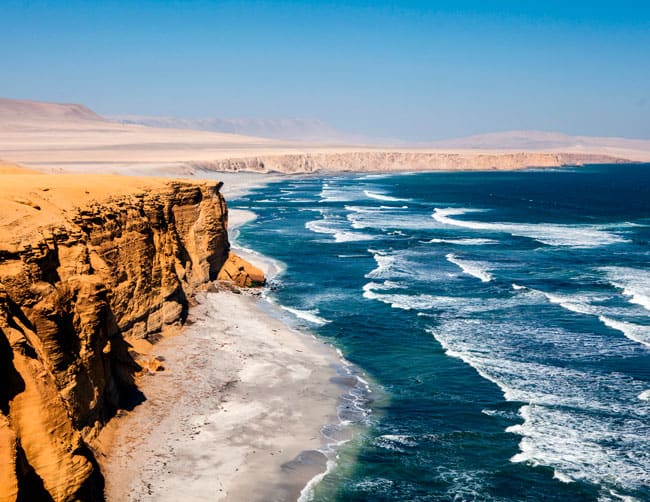 The Candelabra or Candelabro de Paracas

One of the most engimatic giant ground drawings (or “geoglyphs”) in South America is seen best from several miles out at sea. Etched into a sloping hill at Pisco Bay on the Peruvian coast, this strange figure looks vaguely like a candlestick; thus, its name “The Candelabra of the Andes.” The Candelabra is 595 feet long and can be seen from as far as 12 miles out to sea. Pottery found near the figure has been carbondated at 200 BC and is assignable to the Paracas Culture. Separated by 130 miles from the Nazca Plain, with its famed giant figures, the Candelabra apparently is not the work of the Nazca people. It is puzzling why that such a figure would be placed where it could be seen best by sailors. As with Costa Rica’s stone spheres, the Candelabra’s makers, purpose, and symbology are in doubt.

Situated 120 miles north west of nazca is one of the largest of all geoglyphs the 700ft high trident on the mountain side at the bay of Paracas. This mysterious hieroglyph is etched into the ground to a depth of around 2 feet, and outlined by stones which may have been placed at a later date. No-one knows for certain the age of the original carving. However, an expedition by the French writer Robert Charroux in 1969, noted that, although the mountainside was exposed to the wind, the wind contained no dust or sand. Chatroux thus concluded that the trident carving could have been drawn millennia ago and yet still have avoided any significant erosion. The trident symbol at Paracas is a major clue to its origin. According to local legend, this carved trident represents the lightning rod of the god Viracocha, who was worshipped throughout South America. 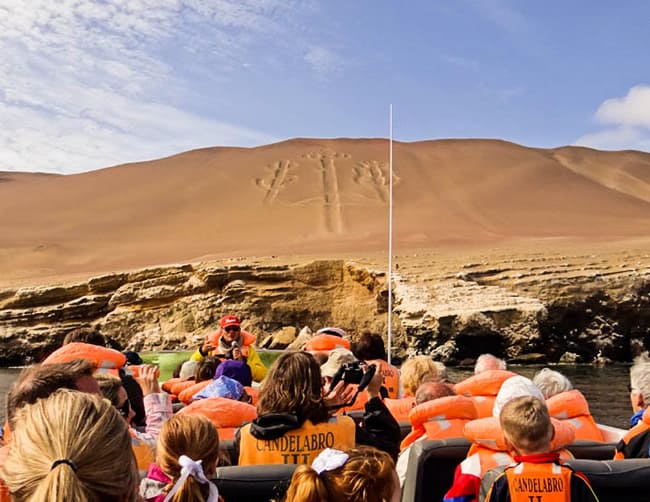