The beauty of diving in Galápagos is due to the fact that most animals do not feel afraid of their visitors, the park’s strict laws of not touching or disturbing the fauna have made the interaction between travelers and fauna respectful.

This is what makes them more friendly and curious and while respecting the limits, diving side by side with sea lions and blue sharks is an unforgettable experience.

There is a wide variety of forms of tourism to the Galapagos Islands that can be modified according to the interests of the traveler.

In the case of diving, there are two modalities: travel aboard a specialized diving cruise or take a simple excursion, to make a decision, the best idea is to choose which sites you want to dive. 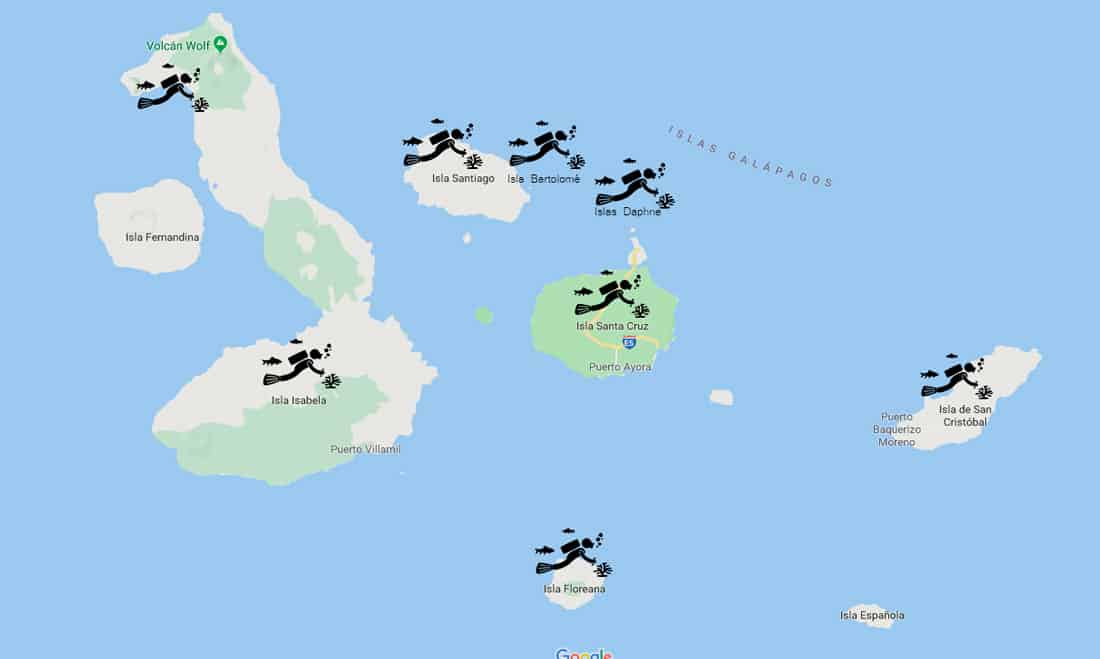 The possibilities of freely roaming the islands are limited due to the protection rules, but there are guides that take the traveler to dive in one or other areas, depending on their abilities and their resistance. The two classic places in Isabela, accessible to any expertise, are Tintoreras and Los Túneles. The first is a group of islets, very close to Puerto Villamil. The second, geological formations created with lava that rise over the shallow waters of the coast making arcs, is at the southern end of the island, an hour by boat. In both places the marine fauna is impressive. From the surface of the surface, with that almost mystical silence that immersion has, you can suspend the time contemplating flocks of stingrays, giant tortoises of different species, black poisonous urchins and sleeping sharks on the bottom.

Places where you can snorkel, with more fish sightings.

This beautiful place is ideal for both advanced divers and beginners. The currents are calm and you can explore platforms, caves and marine walls. The most interesting thing about this site is the amount of benthic organisms that populate the wall. This gives it a multicolored appearance, something like a marine garden. In addition, they inhabit seahorses in black corals, and occasionally sharks, turtles and rays.

2. Floreana Island Galápagos, the Crown of the Devil

The Crown of the Devil is considered one of the best places for surface diving in the Galapagos Islands. It is the most visited place on Floreana Island, near the coast of Punta Cormoran, where you can see penguins, sea lions, turtles, sharks, diversity of fish and dolphins. Tropical birds nest in rocky cavities. The center of the cone is a place full of diving sea lions and colorful fish.

The main attraction of this dive site is the large number of sea lions that inhabit the island, since it lives and reproduces a fairly large colony of this species. We also find, although in smaller quantity, wolves of two hairs and occasionally spine rays. An ideal place for beginner divers and for snorkeling given the good visibility and shallowness. Temperatures are also mild, varying from 10 -26 degrees Celsius.

This is probably the most iconic dive spot in the entire archipelago. The site is the only one where it is possible to swim next to the famous giant whale shark. Also inhabit the areas: dolphins, hammerhead sharks and sharks of Galapagos. Known for strong currents, severe swells and limited visibility, the island is recommended only for experienced divers. Wolf can be visiting only by dive cruisers, specialized in this kind of adventures.

The place has a great concentration of sea lions, both adults and young, for which the place is also known as La Lobería. You can also see stingrays, marbled stingrays and open water species such as eagle rays and turtles (especially in the easternmost part of the islet). The diversity of fish in this islet is quite high.
The diving is ideal for beginners and advanced divers and it is done in the north of the islet, since the tips have very strong currents.

The place is recognizable by the wall of volcanic rock that looks over the sea and is buried deep in the water. The dive site is located in an area of passage of large animals, so the species of mega fauna are very abundant. The number and diversity of fish is high, inhabiting the area the convicted lancer or the parrot with loose teeth. Other species that abound are the Moorish idol, the trumpet fish and the penumbra chopa, Galápagos cod, the coconaco snapper, parrot, macaw, yellowfin surgeon, black drum and pretty boat, sighted. We can also find the most common fish groups such as yellow snapper, Galápagos snorer and blue-gold snapper.
Due to the variability of conditions, the place is recommended for intermediate and advanced divers.

This is one of the most biodiverse places in the archipelago. Here you can find the classic Galápagos fauna such as sea lions, sea turtles, fish and iguanas swimming in the same waters. Perhaps the attraction for important are the Galapagos Penguins since there is a colony that nests in the small bay located to the north of the island. In front of the south beach of the island there is an area where blue sharks rest and reproduce (it is forbidden to practice diving or snorkelling in that place). The abundance of coral makes the place a visually iconic site.

This place knows him as one of the best for diving. It is ideal for beginners too. Here it is possible to swim with playful sea lions, Galápagos eels, green sea turtles, schools of fish and many angelfish. You can also see Galapagos sharks, hammerhead sharks and silver tip sharks.

This dive site is located outside Isabela Island and is a good place for intermediate and advanced divers. It descends to a depth of about 40 meters.
In this place you can find native Galápagos marine life such as Galapagos sharks, groupers and many varieties of fish that swim through the sector.
There are also possibilities to detect killer whales at greater depths.
Large pelagic as stingrays, Galapagos sharks, and occasionally hammerheads and blue sharks. Sea turtles, marbled frying pans and open-water fish also inhabit the sector.